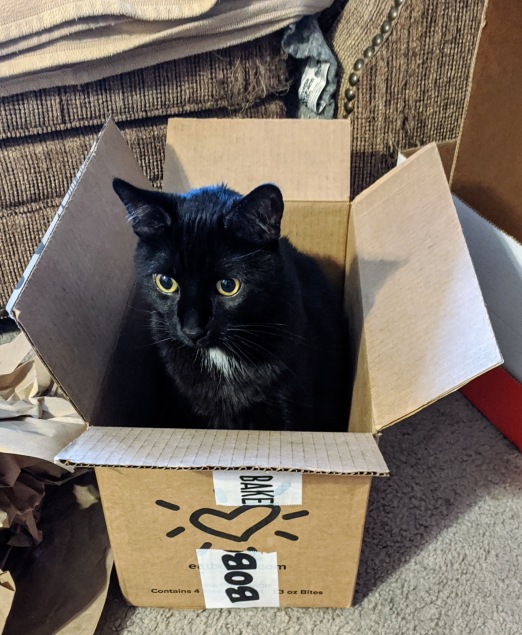 This morning my cat, Basie, got me up at 4am, incessantly meowing, crawling all over me, poking me in the face, and generally being a nuisance. As he gets older, and especially after our other cat, Lena, died, his nighttime behavior has become increasingly obnoxious. He also tends to climb on my laptop as I’m trying to write, likes to flop on top of whatever book or magazine I’m trying to read, and has a dangerous habit of being directly underfoot in the kitchen.

Basie can be annoying, but I love him. Sometimes his antics infuriate me, but I like having him in my life. I’ve almost always had cats in my life. Two years after my parents got married, they got a cat, Sam. Two years later, they had me. Sam was there throughout my childhood and school years. The family joked that Sam was my older sister. I can’t imagine what growing up would have been like without her. She died just a few months after I left home for college. Basie looks a lot like Sam.

It has always bugged me that Hollywood finds it acceptable to hurt or even kill cats as means for a laugh. I’ve seen movies and TV shows where cats have been thrown, sat on, run over, and kicked—always presented as something that is supposed to be funny. You would never be able to get away with that with a dog. I’m not anti-dog, but I strongly anti-anti-cat. As a kid I could never watch Tom and Jerry, and in fact a recurring dream I had involved me heaping revenge on mice on Tom’s behalf. (These days I’m not anti-mouse either. In fact, my wife and I have rescued more than one mouse from Basie.)

Much more than dogs, cats polarize people. So why is it cats have become such internet superstars? I think it is precisely because of their mystery and unpredictability. (I think the brief trip inside the mind of a cat in the movie Inside Out explains cat behavior better than anything else I’ve ever seen.) Cats are eccentric and ever-shifting. One moment they can be the very picture of soft, purring comfort; any time advertisers want to make something look especially cozy, they add a cat to the picture. But the very next moment, without warning, that demure bundle of fluff can switch gears and become an insane wildcat. A special I once watched about cats said, “To have a cat is to invite a little bit of the wild into your life.” I couldn’t agree more.